Sometimes I feel the urge to find adventure.  Sometimes I believe I’m being drawn by a force I can’t describe.  Sometimes, God just leads me to where He wants me to go. 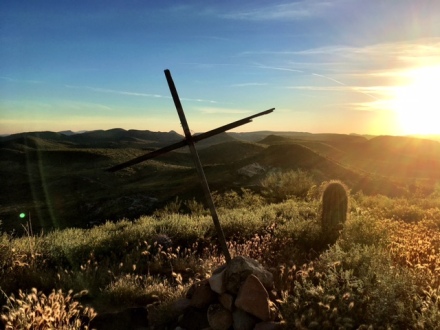 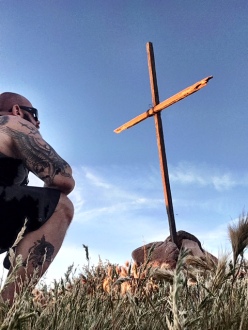 So one early spring evening I’m fed up with my circumstance in life and things haven’t been going well. I’m kicking the can, so to speak, that I’m stuck in the city.  So I feel drawn to get in the car and drive north.  I was driving down the i17 near Black Canyon City. I look to the west and saw two very large saguaro cactus on top of a mountain.  So I felt compelled to run up the mountain.  In just trail running shoes, shorts and a Camelback I set off. I quickly became mired in the fact there was no path or trail.  As I’m going along, I had thoughts in my head that only myself and some Native American a hundred years ago were probably the only ones to set foot in this area. The area in the beginning was completely covered in petrified wood.  The area reminded me of bones, almost of like an area of death.  The only thing missing were skulls.

As I continued on I was met with Jumping Cactus…millions of them. Not just full-grown ones but many that only stood inches off the ground. If you know anything about jumping cactus you know that these things are no fun to traverse through.  I had to stop several times to pull deeply embedded thorns out of my feet and shoes.  The little ones tend to be worse.  They are low to the ground and inevitably they go right into your toes at some point.   As I continued ascending the mountain the Jumping Cactus only seemed to get worse.

Something told me to continue and the determination to reach the top was never stronger.  As I’m sitting there pulling these painful spikes out of my toes I’m thinking how many would call this stupid or dumb.  I wasn’t going to be stopped.  As I neared the top I reached an impenetrably dense area.  The type of dense, rip at your flesh brush that you only can see to believe.  Feeling frustrated after seeing no possible way around I stood there…and I stood there.  I cleared my mind and as I did the Hillary Scott’s song “Still” came into my mind.   As I stood there for a few more minutes letting my mind “be still” a path was revealed out of nowhere.  I didn’t question myself on how I had missed the trail because I knew I’d searched all routes and this truly was a “revealed” path.  I made it through the area and almost to the top without too much tearing of my flesh.

I stopped to have a conversation with a very old cactus. I’d imagine this cactus was several hundred years old.  The history this immense cactus must have witnessed is staggering.  The world’s changes passing by its steadfast stand on that mount.

I knew I wasn’t done. I continued to the top and as I rounded another dense bush and came to the peak I was met by the most staggering unexpected thing.  The sun was setting and I don’t know if the lighting could have be more perfect but what I saw had me instantly on my knees.

For there at the peak was a simple cross. Two long stakes tethered with rusty wire, sunk down into a base of rock.  How it got there or why it was there I have no idea. It wasn’t a time to question like that.  It was a time for living in the moment.  I stayed at the foot of this cross in deep communion until I almost had no light.  Ironically when I was forced to leave the cross for fear of traversing cactus in the dark on my way down I was shown a very distinct, almost cactus free path.

This is a true story. This happened to me. I lived it. I believe this is also a metaphor for our walk with God. Be still. We may not know the path but God does and He already has traveled through your worst. 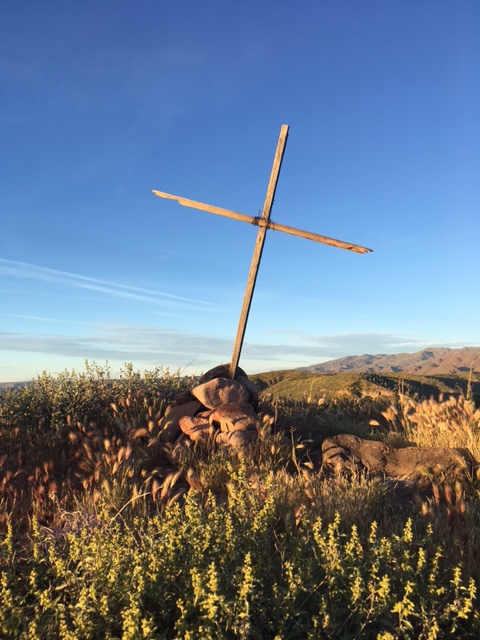