Have you ever been driving down the road and see a place that as you watch it in your rear view mirror you start to ask yourself, “I wonder if that was cool”?  I’m sure you have a thousand times, especially on uncertain roads or travels you’ve never been on.  We have gotten into such  rush to get from point A to point B that we are missing out on awesome experiences.

I caught myself doing this.  I was on an unfamiliar stretch of road and contemplating the clock versus the destination I needed to be at.  We all know the feeling.  These roadside locations with faded signs or almost mysterious origin. Conjuring up movies like the “Hills have Eyes” comparisons and we just keep driving, only to wonder if what we passed might have been interesting.

So there I am driving past this sign that says “Moqui Cave“.  I see the side of large rock, some out houses, a few random vehicles, a lady sweeping the red stone…and I keep driving.  Breaking my own rules as I drive by something possibly entertaining!  After checking my mirrors for traffic, I slammed on my brakes and threw it in reverse.  Sliding into the makeshift parking lot, I got out and began looking around.  I knew I had made the right decision as I examined the exterior walls that enclosed the caves entrance! 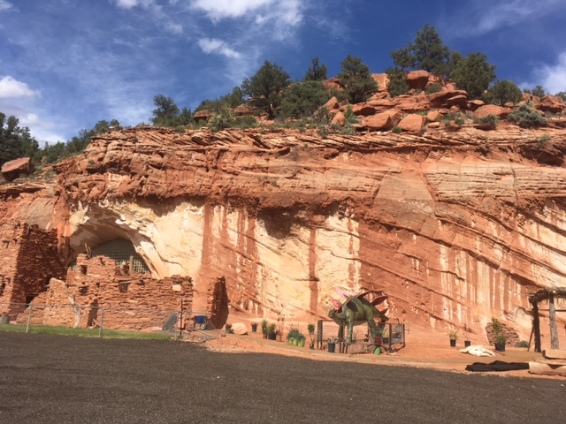 This place didn’t scream much, on the outside, but I love caves so I had to see what this had to offer inside.  Later, after exiting I’d notice a little dinosaur display being started.  I’m sure this probably is in hopes of getting more people like me to slam on their brakes or maybe get some young kids, who might be looking out the window, to get their parents to turn around!

What I found inside was very amazing.  A mix between fossils and awesome rock displays to deep history.  I was met by a young lady who identified herself as family of the owners.  After paying a modest $5 entry fee she walked showed me around to parts of the cave.  I know the term Moqui is an ancient term for reference to the Hopi Indian Tribe but, my friends, this cave had much more to offer!

This cave wasn’t just full of ancient history, Dinosaur tracks, and fossils but the cave also has a very recent history that was fun to learn about.  When I walked in I immediately saw a long bar in a side portion of the cave.  My curiosity really got me.  I was expecting the cave to be full of ancient items or even just a big dark hole.  What I discovered was this wasn’t just a barren cave to explore, or full of ancient artifacts but a cave having a piece of early communal history involving the Church of Latter Day Saints (Mormon), entrepreneurship, and Hollywood ties!  The bar being a piece of that history at one point as the cave served as a meeting hall and local watering hole to generate funds.  The families ties to Old Hollywood films where things you’d definitely not expect to learn in a random cave!

I know many young children will marvel at fossils and the fossilized dinosaur tracks.  The colorful displays in the back half of the cave were also unexpected as were the families display of other ancient artifacts that had been picked up in other explorations.

The Moqui Cave has a nice little write up on:  Visit Southern Utah and Kanab Guide if you want to research before stopping.  It can be accessed by driving scenic Highway 89, about 5.5 miles north of Kanab, Utah.

So, what we have here a valuable lesson.  Take the time to stop.  I know my $5 was well worth the experience. Things like this stick with you.  I know I spoke to a teenager recently and after studying my picks they exclaimed they remembered going to this very spot earlier in their life.  Their parent was even more shocked that their child had remembered! You never know what you might find in even the simplest of stops!

I am a adventurer, licensed private investigator, actor, history buff, and most importantly a son of God. View all posts by jaxmenezatwell